After we spent 4 months in Kokomo (Indiana) to obtain our Private Pilot License, it was time to return back to the Netherlands on the 23rd of August. After spending a few days whishing we could have stayed longer in the United States, it was time to focus on the arrival of the Aeronca L-3 Defender. This beautiful warbird would arrive in Antwerp, which used to be a crucial transit port for the Allied Forces during World War II. This piece of knowledge made the arrival of the Aeronca L-3 Defender on the 21st of September even more special and exciting. We were super excited to see that the warbird survived the transit from Kokomo (Indiana) to Antwerp (Belgium) perfectly. There were no damages or whatsoever which is all thanks to all the help we received from the wonderful people at Glenndale airport (8I3) while preparing the warbird for the long transport. Once the L-3 was out of the container, it was time to put her back together again. While she had to wait for the assemblance at Raymond’s Aircraft Restoration, the L-3 was accompanied with some beautiful stable mates such as the Stampe, Stearman and a Piper J-3. We could not have wished for better company!

Once the L-3 was put back together again, it was time to wait for some good weather in order to fly her to the Ursel Airbase. This airfield was established in the 1930s and originally used to belong to the Belgian Airforce. But in May 1940, the Luftwaffe took control over the airbase. Luckily, in September 1944 it was liberated from the Germans by the Allied Forces. From the Ursel Airbase, four squadrons of Hawker Typhoons fighter bombers were operated in order to break the resistance of the German troops so that the entrance of the Antwerp harbour could be opened. After the war was over, the airfield was being used for recreational activities.

With this information in our mind, it reinforced our feeling of freedom while flying the warbird from Antwerp to Ursel, which will be her new home. The L-3 has already drawn quite some attention since its one of the few ancient American airplanes around with such an amazing story. We have already established the Ancient Airlines Europe Club and we have gathered already a big number of aviation enthusiasts here within the Netherlands 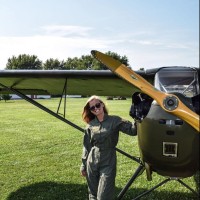